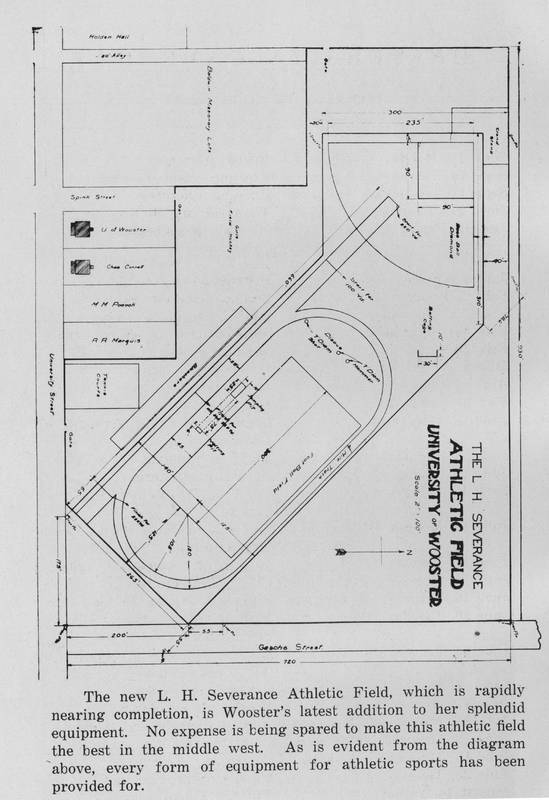 This 1914 diagram is the earliest campus map that could be found in the Index that showcased athletic facilities.  This particular map showcased the L.H. Severance Athletic Field, which consisted of a 100 yard football field enclosed by a quarter mile track, both running diagonally northwest to southeast.  The field was boardered on the south side by a stadium.  The facility fit into a natural bowl which also included a baseball field built into the northwest corner and a grand stand built into the hillside.

Of additional interest are several proposed facilities to the southwest, boardering University Street. These included a set of tennis courts (number and size not stated), and a Girls Field Hockey Field where Spink Street ran into the campus and below the Baldwin Missionary Lots.  What is of particular interest is that this is the first time field hockey was mentioned in the Index.  The first evidence of women playing field hockey at Wooster doesn't appear until the 1919 Index, for the academic year 1917-1918.  Two posibilites would seem to exist: Either women actually were playing field hockey at Wooster prior to 1917, or the plans to have a field hockey field back in 1914 were very forward thinking. 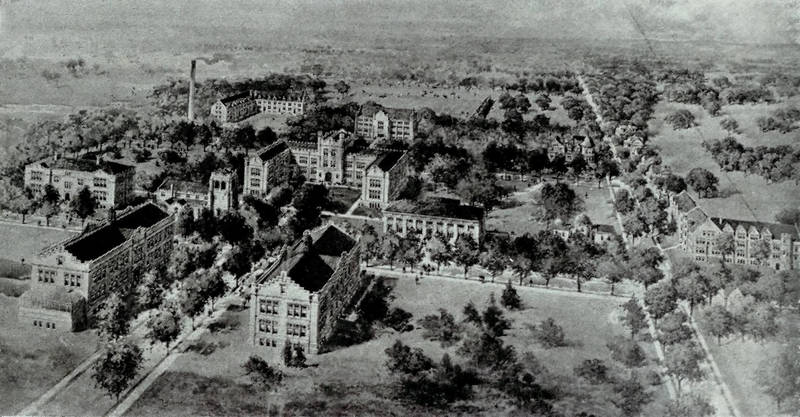 This particular campus map from 1919-1920 predominately shows the campus west of Beall Avenue.  Toward the top center of the drawing, behind Kauke Hall, you can see the recently constructed Severance Gymnasium.  North of the Gymnasium appears to be an athletic field and a grandstand in the open space, running east to west.  Also visible is the roof of Hoover Cottage to the right of Severance Gymnasium and Kauke Hall.  Hoover served as the first dorm on campus for women students.

The east side of campus is just barely visible with Holden Hall on the far right.  Holden served as the second dorm for women and housed a gymnasium in its basement for their use.  Out of sight and behind Holden would be the new athletic fields for football and baseball and the new outdoor track shown in the first drawing above.

To the left (west) of Kauke Hall and behind Memorial Chapel is the Old Gymnasium, although it is not visible.  It is among the trees below the Power Plant (smoke stack).   Visible in the upper left corner of the drawing is the first men's dormitory on campus, Kenarden Lodge. 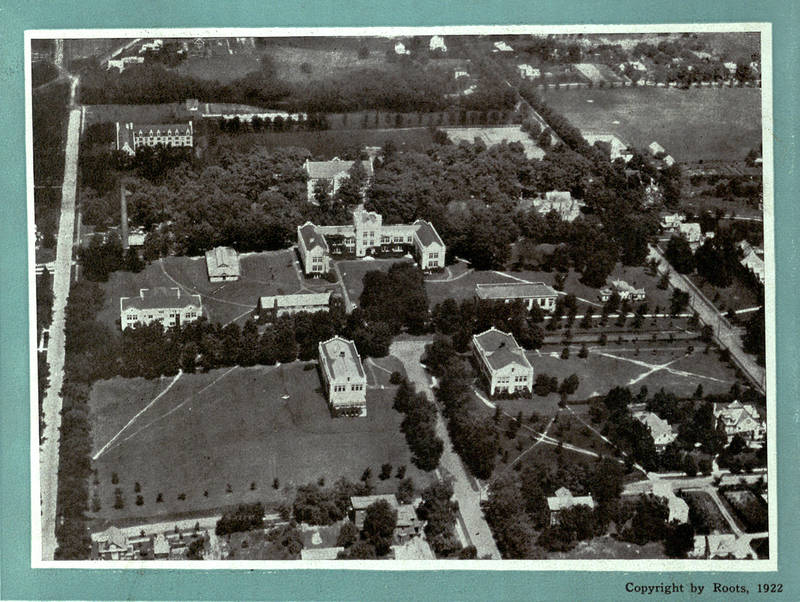 By 1922, an aerial photo of the campus had been taken.  It appeared in the Index for the 1923-1924 academic year.  Most of the structures mentioned above for the drawing can be seen more clearly in this photograph.  For example, the Old Gymnasium can be seen in the clearing to the left of Kauke Hall.  In addition, Hoover Cottage is just a little more visible to the right and slightly behind Kauke Hall.  Less visible is Severance Gymnasium, directly north behind Kauke, and the athletic field behind Severance Gym.

Two structures visible for the first time in this photo are the tennis courts near the top right along Beall Avenue.  A large complex of courst sits to the left of Beall, while a smaller set of courts sit to the right.  Both appear to be clay courts due to their lighter color from the grass that surrounds them.  Most of the outdoor athletic complexes are still further east, behind Holden Hall and are not visible in this photograph.. 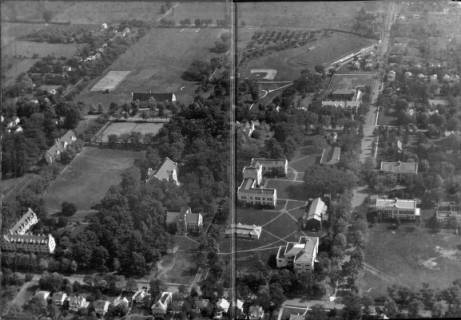 This aerial photo in the 1941 Index gives one of the best views of the College of Wooster athletic facilities.  The photo view looks from west to east (bottom to top). Once again, the Old Gymnasium can still be seen in the clearing below Kauke Hall.  Severance Gymnasium is still burried in the trees to the left of Kauke, however, the athletic field behind it is very clearly visible.  Since the previous aerial photo, Babcock Hall has been built on the location where the tennis courts on the east side of Beall were previously. The college still has two sets of courts: one set across the street from Babcock, and the second set to the north (left) of Babcock in the clearing along Wayne Avenue.  The courts still appear to be clay.

This photo also clearly shows the athletic complex to the east (top right of center of photo).  Visible in the photo are the baseball field, Severance Stadium, the football field, and the track. 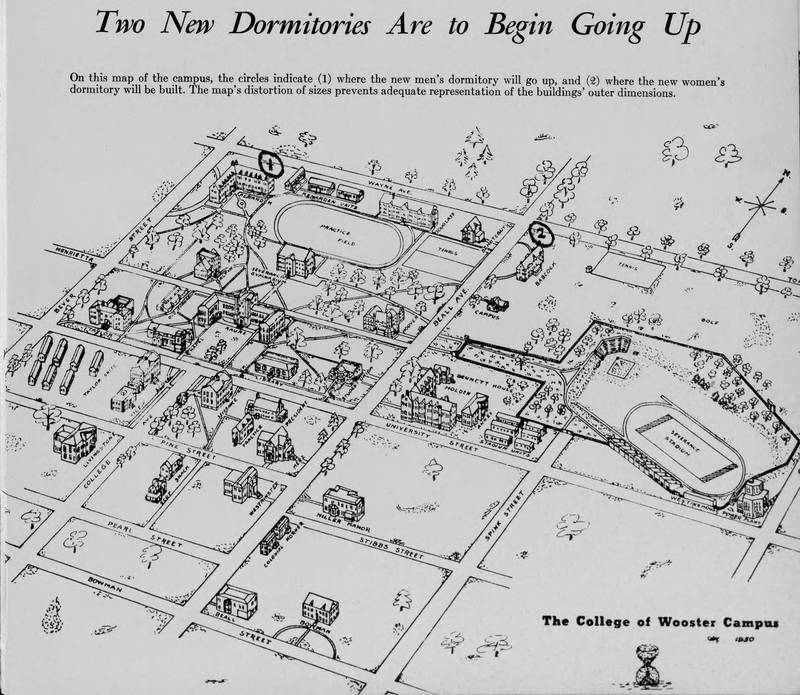 This particular drawing of the campus showed the location of two new dormitories that were about to be added.  The map is not entirely to scale, but is does a very good job of showing the location of the athletic facilities.  On this map, the Old Gymnasium is still on campus just to the left of Kauke Hall.  It will finally be torn down at the start of the 1960's. Severance Gymnasium is still the main athletic facility for the campus.  It is located behind Kauke Hall, and the practice field can clearly be seen just behind it.

The two sets of tennis courts can also be seen on either side of Beall Avenue: one set near the practice field, and the other set just south of Wayne Avenue near the location of the new women's dormitory (#2 on the map).  The map does not show how many tennis courts each facility holds.  On the far right side of the map, Severance Stadium, the track, and the baseball diamond can be seen in a natural bowl.  The dark line encircling these facilities was actually a fence that was put up to enclose this area.

A new addition to the campus map is the golf course, just above the stadium complex.  Holes for the course are not clearly indicated, but the course started behind Babcock Hall and would have crossed Gasche to the right of the map. 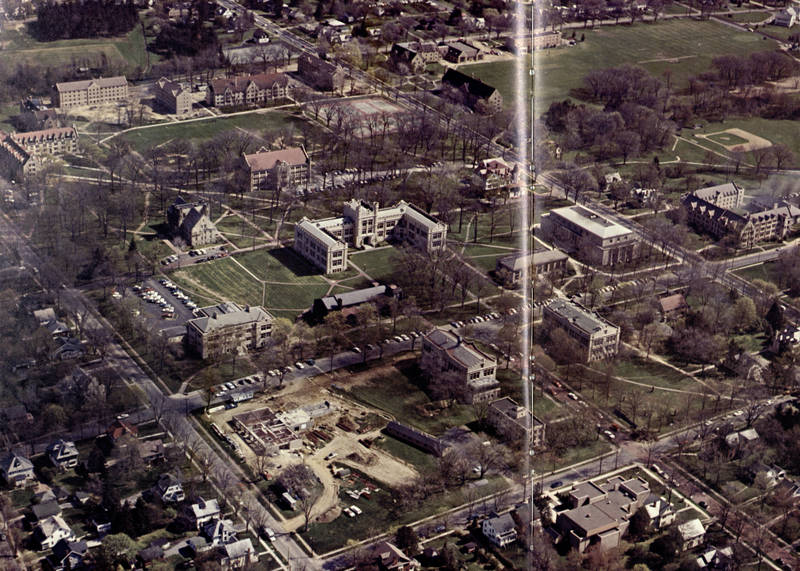 This aerial photo from the 1966 Index shows the relocatiopn of the tennis courts on the east side of Beall to yet another location.  The courts are now on the north west corner of Beall and Wayne.  Galpin Park can also be seen now in the far top left of the photo.  This area was used for archery classes and eventually will house the softball field on the upper level.

The softball field is stil visible in the bowl near Severance Athletic Field and Stadium. The golf course is also visible in the right top corner of the photo.  This upper space will soon be dedicated to three new fields: a field hockey field, the Carl Dale Soccer field, and the new location for the baseball field.  These will be constructed as the new Physical Education Center is builtjust west (to the lfeft) of the baseball diamond.

Severance Gymnasium is still visibnle with the red roof to the west of the tennis courts.  A practice field can be seen behind the gymnasium.