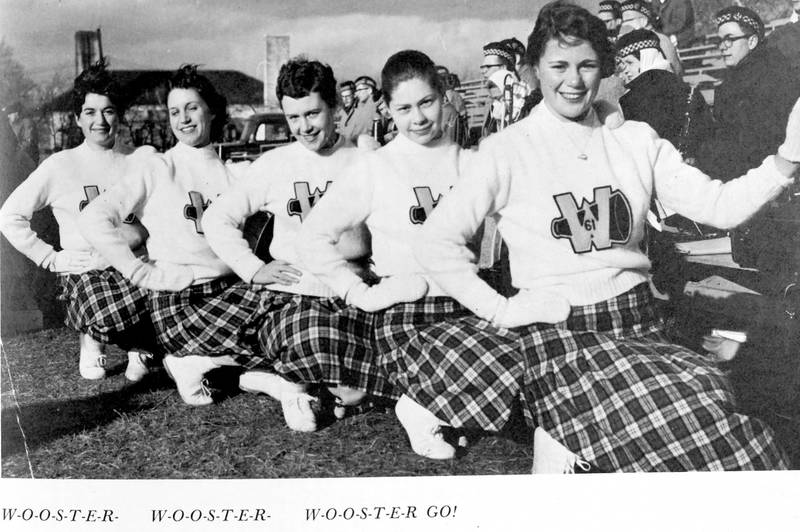 During the 1950s, men began to return from World War II and with their return came the return of women to the household. Prior to this, women had engaged in athletics in order to continue providing the entertainment sports had for so long. Yet with the men coming home, women were no longer expected to play sports. Women were expected to run the household, take care of children, and essentially emulate the stereotypical housewife. Unlike the typical American woman, the College of Wooster brought in a pioneer of women’s athletics: Maria Sexton.

After Kathleen Lowry stepped down, Maria Sexton joined the Wooster athletic community in 1953. Unlike Lowry, who emphasized club sports and recreation, Sexton wanted to introduce high levels of intramural competition. She introduced national championships as well so the young women athletes would have the opportunity to play other college-aged women. In addition, play-dates were a common occurrence. Play-dates were scheduled days of athletics where women from all different colleges had the opportunity to not compete against one another but play with one another.

The Women’s Athletic Association (WAA) through its Board of upper class leaders and physical education majors coordinated sporting opportunities for women.  First, WAA sponsored intramural team competition in basketball (complete with mandatory practices before competition) volleyball, hockey and softball.  Teams were organized by female social clubs, groups from the same class year, and independents. Intramural sports offered individual competition in golf, archery, tumbling and tennis.  For the most part, the sports were lifetime sports including sports new to women’s athletics that emphasized fun and recreation. 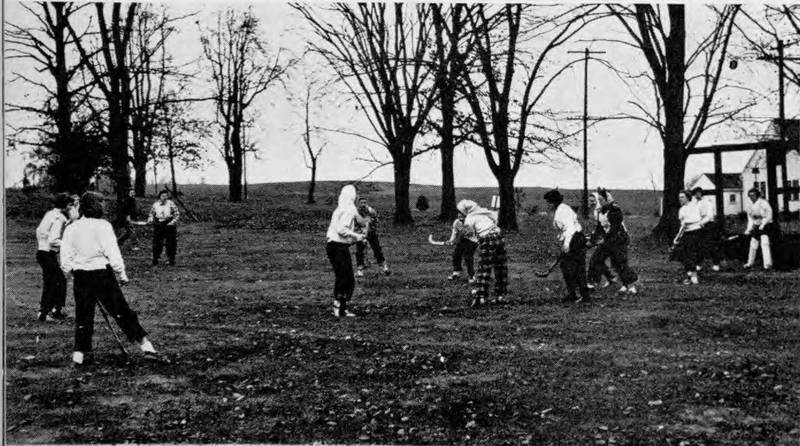 The Women’s Athletic Association, or W.A.A, though highly supportive of women’s athletics, also sponsored a variety of activities in which men and women participated together. These activities were designed to help students find potential mates. Sports featured were bowling, badminton, hiking, square dancing and an annual charity bridge tournament. In addition, by selling concessions at football games and candy in women’s residences, the W.A.A. raised money to support club sports. Finally, the W.A.A. owned an off-campus cabin where many co-ed, outdoor activities took place. Similarly, female social clubs, such as the sororities (who played sports as well), conducted their events here.  The cabin was also the location for coed outdoor activities. An example of an outdoor activity sponsored by W.A.A. was the Dad’s Day field hockey game. In the photo, women are seen playing field hockey in long pants and tee shirts. Displays of athleticism were especially important in front of parental figures, specifically fathers, so that women could show their athleticism as well. 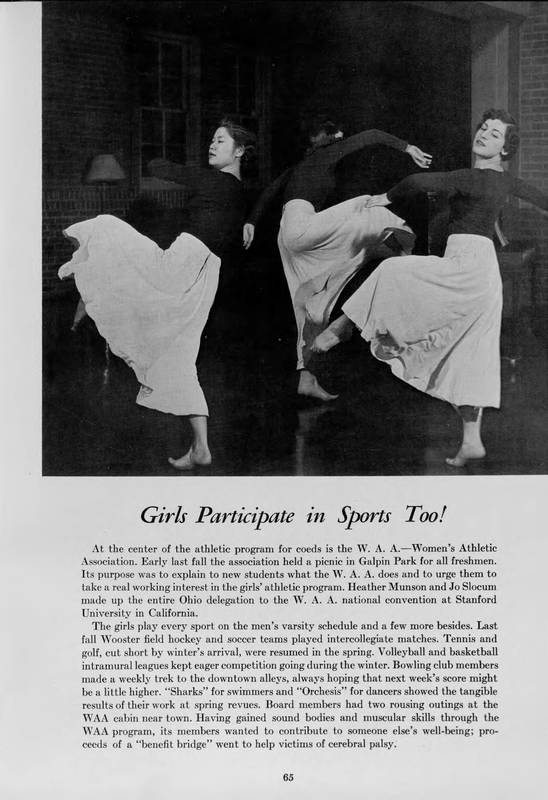 Two exceptional club sports that women took part in were the Sharks as well as Orchesis. The Sharks were a synchronized swimming group which hosted one to two shows per year. They had arduous tryouts yet the hard work paid off, and more often than not their shows drew large crowds. Orchesis was a modern dance group. The group specifically focused on women’s poise and elegance however, similar to the Sharks, had rigorous practices that created beautiful shows and routines. 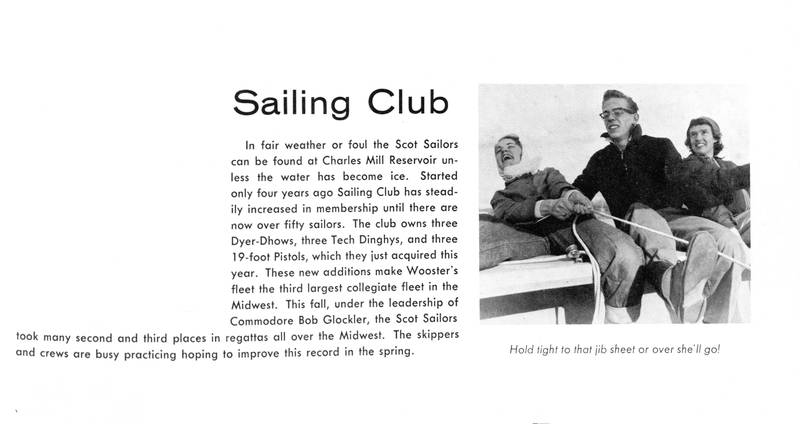 The sailing club was a prime example of a co-ed club. Tryouts were held in which both men and women were encouraged to participate. Practice consisted of 30 mile trips across the Charles Mill Reservoir, and exemplified the strength of not just male athleticism, but the female athletes partaking as well. The Wooster Sailing Club won regattas and may have been the first team to register wins against other schools within multi-team competitions. 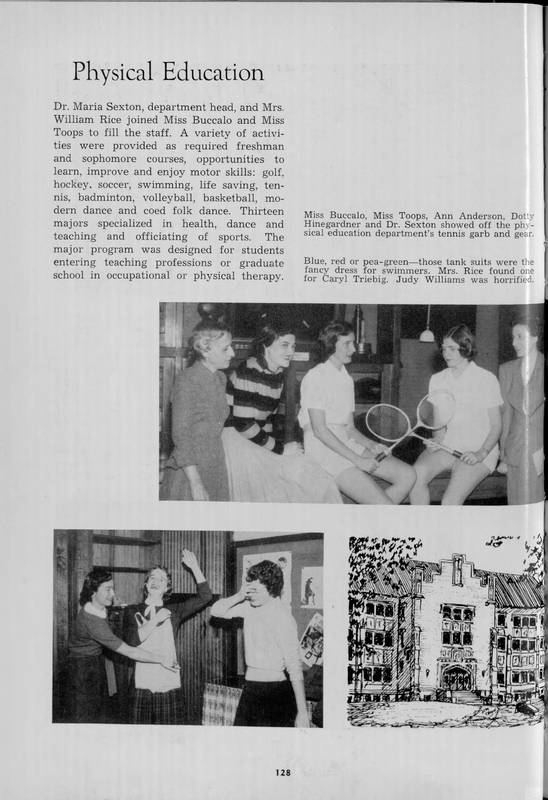 Overall, though the 1950s emulated stereotypical and sexist ideals for women, the College of Wooster began to expand the boundaries and truly exhibit what women were, and still are, capable of within the athletic department. Through club sports, intramural events, and co-ed activities, the college showed promise when it came to the advancement of female athletes, and moreover, for the advancement of women’s rights in general.