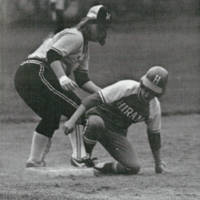 The image depicts Wooster softball player attempts to tag a Hiram base runner. They are seen wearing baseball cap, softball pants, and short sleeve shirts with an undershirt. The administrative head at the time was Nan Nichols. 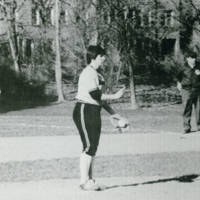 The image above shows a Wooster softball pitcher on the mound with the ball. An umpire can be seen on the first base line in the background. This photo was part of a two-page spread on women's softball. The woman is seen wearing a short-sleeved top,… 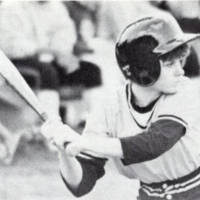 The image above is a Wooster player at Bat, 1985-1986. No information is given to identify the player. The player is seen wearing softball tops (short sleeved, keyhole front), softball pants, and 3/4 length shirt under the jersey. The administrative… 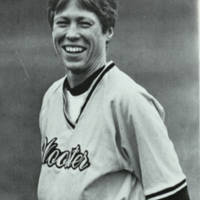 The image above was titled; "People Make a Difference." Debbie Stockham was the women’s softball and volleyball coach, 1984-85 season. Stockham is seen wearing softball coaching outfit. The administrative head at the time was Nan Nichols. 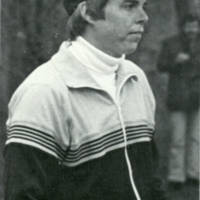 In the picture above Women's Softball Coach Gerri Knortz is seen looking on. Knortz also coached volleyball. Knortz is seen wearing a baseball cap and jacket. The administrative head at the time was Nan Nichols. 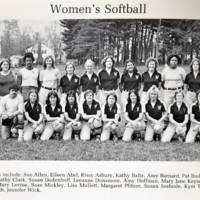 The image above depicts the Women’s Softball Team Photo, 1979-80. The caption under the photo lists players in alphabetical order. Gerri Knortz, (back row, far left) was their coach. There appeared to be several men who may be assisting with the… 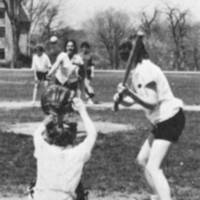 The photo is of girls playing softball in the quad. This photo was in an activities section. The women were most likely participating in intramurals or a gym class. The batter was hitting left-handed. The catcher had a catching glove, mask, and chest… 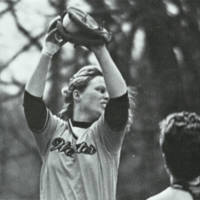 In the photo above, Wooster player Sue Hollingshead in the windup. Kate Jones was in the foreground facing her. “Scotties Fast Pitch Their Way To Softball Respectability.” The administrative head at the time was Nan Nichols.