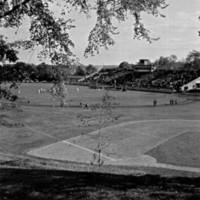 The image above is a color photo of the Baseball Stadium and the Football Stadium from the hill behind the baseball stadium. A football game appears to be in progress as the stands are filled and teams can be seen on the field. 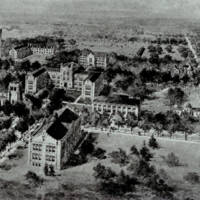 The image above is a drawing of campus at the time. Severance Gymnasium is prominent in the center back with the football field behind it. The old Gymnasium is barely visible between Kauke and the Chapel, in a grove of trees. The Observatory and… 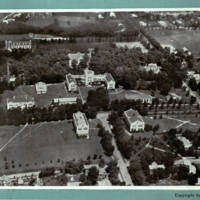 This aerial photo shows the campus layout in 1922. Tennis courts can be seen on both sides of Beall Avenue. In addition, the old Gymnasium is also visible to the west of Kauke. The administrative head at the time was Kathleen Lowrie. 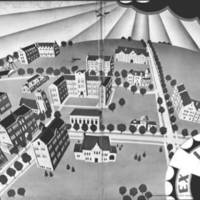 This illustrated a map of the campus was on the inside cover of the 1931 Index. It did a great job of showing the locations of the old Gymnasium, the Power Plant and the Water Tower that had been in previous facility photos. It also shows the newer… 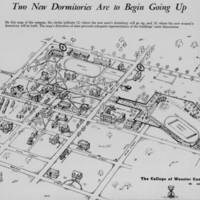 This Campus map shows the two tennis court locations. It also shows the location of the athletic complex and the stadium with a fence around it. Note the tennis courts near Douglas as well as where Wagner and Kittredge were later built. Also, the old… 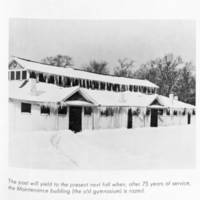 The caption of the image was "The past will yield to the present." The upcoming fall when, after 75 years of service, the maintenance building (the old gymnasium) was razed.This photo is of one of the last of the old gymnasium, It was taken in the… 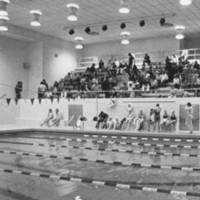 This is a view of Timken Pool during a women's swim meet in 1975-76. The teams can be seen sitting along the bench area along the deck. The administrative head at the time was Nan Nichols. 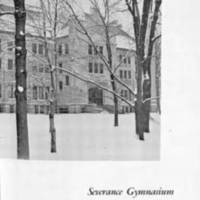 This is a photo of Severance Gymnasium in the snow in 1954-55. It is now Ebert Hall which is an art building. The administrative head at the time was Maria Sexton. 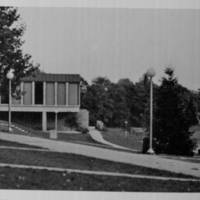 This photo shows the Physical Education Building with a particular view of the Office Pod from the west. That pod was torn down in 2010 when the new Scot Center construction began. The administrative head at the time was Nan Nichols.