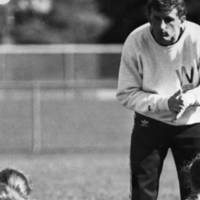 The image above features Nick Cowles, head of women's soccer coach, as he is leaning in to talk to his team. He is seen wearing a sweatshirt, and sweatpants. The administrative head as Nan Nichlos.

The image above is of the girls' volleyball team. Believe it or not, it was a varsity sport for the girls on the Hill. And believe it or not, for the first season they bounced up a winning record of 4-2. Carolyn Hole was team captain, and a fine play… 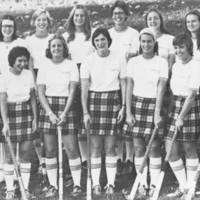 This picture is a team photo of the 1975 Field Hockey Team. This team participated in the very first National Championship in Field Hockey, which was sponsored by the Association for Intercollegiate Athletics for Women and the United States Field… 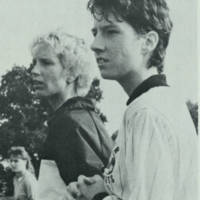 Kathleen Dolan and Coach Jackie Roth on the Sideline, 1987-88

In the picture above, Kathleen Dolan was seen, with coach Jackie Roth on the sideline. Wooster soccer was in its third year as a varsity program. They were seen wearing a long sleeved shirt. The administrative head at the time was Nan Nichols. 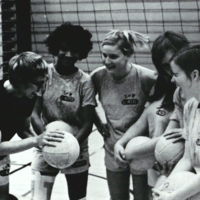 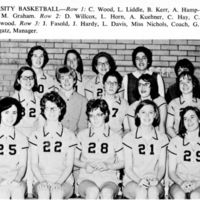 This is an image of the second women's varsity basketball team at Wooster in 1965-66. The women's season was in the winter of 1966, and Nan Nichols (top row, second from the right) served as the first head coach. The women are in uniforms with… 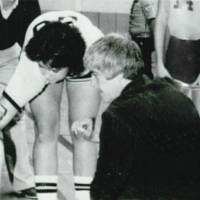 The image above is the head basketball coach Nan Nichols huddling with players on the sideline. The uniforms were comprised of shorts, long socks, v-necked jersey with a number on the front. Nichols was also the administrative head at the time.