Synchronized swimming first began in the early 1900s, and it allowed its swimmers to develop and showcase strength, agility, and grace through its three disciplines: solo, duet, and team. The competitive rules and judging of the sport mirrored that of figure skating and gymnastics, with which it shares an emphasis on beauty, musical interpretation, and dramatic flair. Synchronized swimming was first popularized in 1939 by Olympic swimmer Eleanor Holm, and was officially recognized as a competitive sport by the Amateur Athletic Union in 1945. 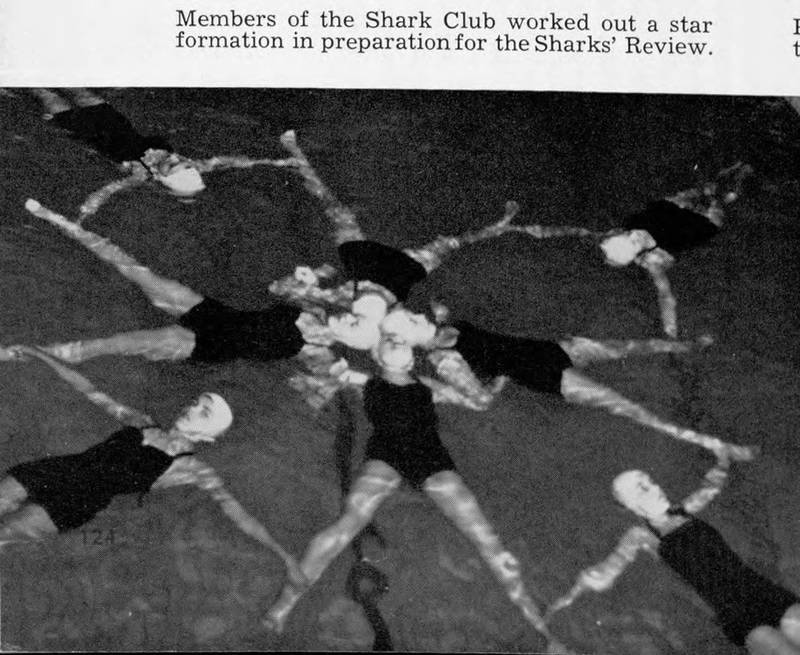 Sharks form a Star In the Pool

Long before synchronized swimming came to The College of Wooster, the earliest record of a swimming program at the college is in the 1918-1919 academic year. A club swim team formed and practiced in the small pool located in the Severance Gym, competing in two meets throughout the year. Twenty years later, in the 1940-1941 academic year, swimming was presented as an activity sponsored by the Women’s Athletic Association (W.A.A.). In the spring of 1949, Wooster’s first female synchronized swim group, the Sharks, became an official club and was performing in full force by the following fall semester. Any girl who was interested in joining had to prove that she could execute the crawl as well as side, back, and breast strokes in a graceful manner to swim with the Sharks. In March of 1950, the Sharks were given the opportunity to showcase their abilities in the “Sharks Review,” where a picture of the women forming a star in the water can be seen. 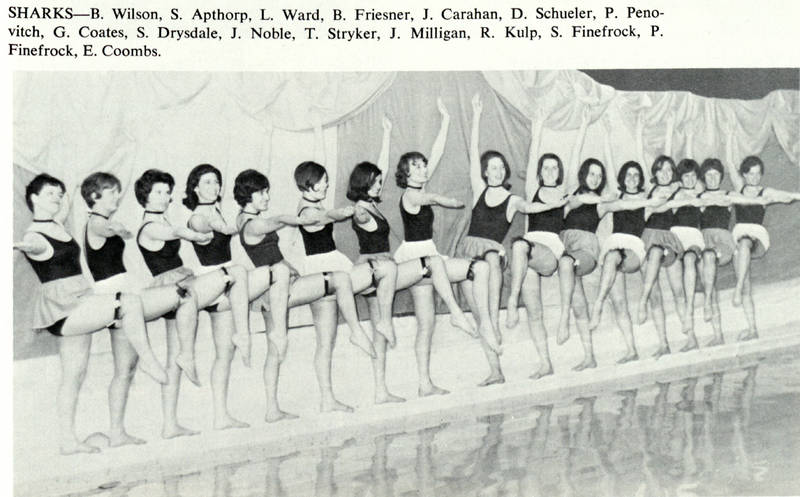 The Sharks continued to be very active throughout the 1950s. They performed for the annual Winter Pageant at the college in 1951 and presented a performance of their own, their annual Water Ballet, in 1953. Reports indicate that this same academic year, 1953-1954, is when the Sharks may have separated from the W.A.A. The Sharks were confirmed as being an independent, unsponsored activity in the 1957-1958 academic year, but they were still performing regularly, being featured once again in the “Sharks Revue” (formerly “Sharks Review”). They continued to carefully plan and perform routines through the early 1960s, organizing another water show in 1960 and once again having a performance featured in the “Sharks Revue” in 1963. The last performance by the Sharks is from 1969 called “Follow the sun” featuring a trip to cities around the world in music though synchronized swimming routines. 1969 was the last year information was found in the Voice or index pertaining to Sharks synchronized swimming.

Information on Sharks contributed by Kate Thurston-Griswold, Morgan Wagers and Ryan Wobbe (May 2018).