Volleyball was created in 1895 in Holyoke, Massachusetts by William Morgan as a modification for basketball so men would not overexert themselves in leisure play.  Morgan originally named this new sport “Mintonette” but it was changed to “Volleyball” when he was introducing this new game as an official sport to the athletic committee. Volleyball came to be a working class sport that was a combination of tennis and basketball. It was considered a positive influence on recreational sport because of its broad level of participation that was less intense. It was an easier sport for women to get involved with because it was thought of to represent weakness, frailty, and passivity. It was acceptable for women because with traditions it instilled courtesy, cooperation, and integrity. Volleyball has stayed a noncontact sport from the beginning but it has changed from a more of a static game to a game that includes diving, rolling, jumping, and a quicker speed of play. This occurred in the 1960s around this time is when the sport started to become more popular throughout the United States because men started playing this game while at base camps during World War 2. Following this spark in popularity the Olympic committee added it to the Olympic games in 1964. 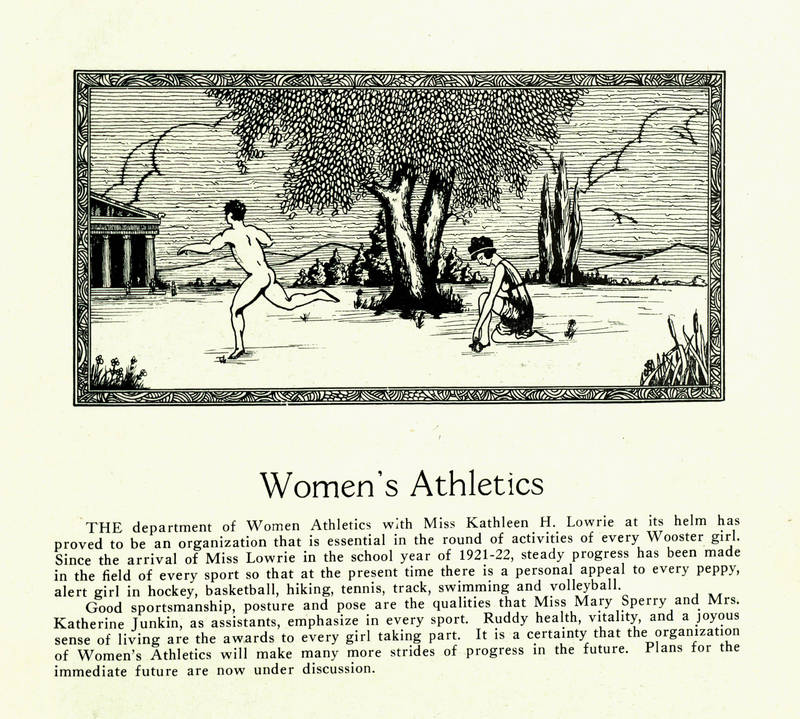 In 1920’s there was a push for sports to be available for women. At The College of Wooster this was present by Kathleen H. Lowrie, who was part of the department of Women’s Athletic. Although many women wanted more sports for themselves they also demanded a certain image women were suppose to portray. They were expected to have good posture, pose, good sportsmanship, and were suppose to be participating in the sport for enjoyment and slight competition. The department of Women’s Athletics seeked for future opportunities where women could participate in sports. The department however left out changing the way women are perceived according to the way they play these sports. Starting in 1926 and continuing through the 1930s were class teams which was when several volleyball teams were formed for each class year at the college. Each team was lead by a class manager that organized the teams and games that were done. 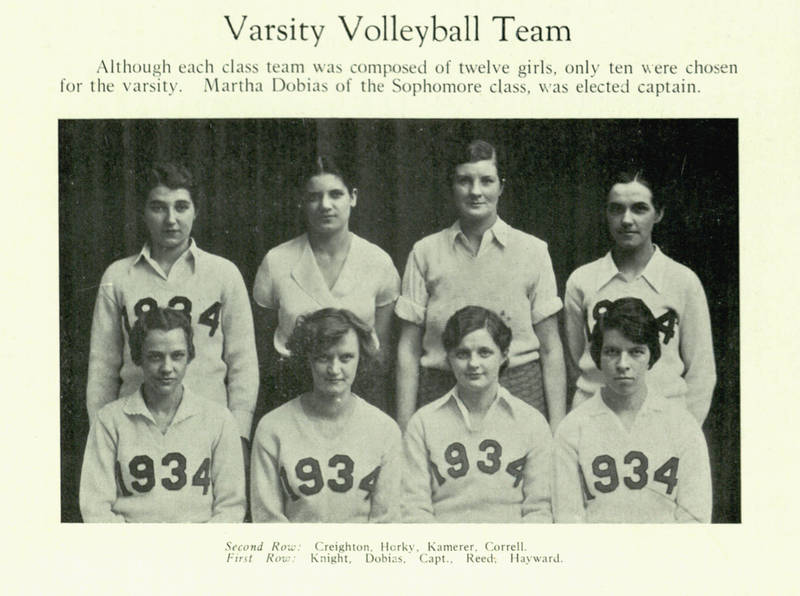 Two women were responsible for coaching and directing women sports during the 1930s. Miss Katherine Lowrie and Miss Dorothy Dillon were responsible for mostly all women sports within The College of Wooster. Miss Dorothy Dillon was the coach of volleyball as well as basketball baseball and hockey. It is interesting to read how the sports weren't given a coach who specialized in one specific area but instead had an overall knowledge for the sports. During the 1931-1932 season the first varsity volleyball team appeared in the Wooster indexes. Before this year, competition was done between the classes. Each class year formed an intramural volleyball team to compete against the other class years.

The varsity team was created by a selection of the best players from each class year to form a team of 10 players to compete against other colleges in their league. This was also the first year a Team Captain was selected, before they were considered “team managers” which had the same duties as a captain just without the honorary title. The top players from each team were chosen to make up the honorary varsity team. This was not an actual team, but a title given to represent that best players. The 1937-1938 volleyball team was an nationally recognized All Star Team. Women would wear a mix of short skirts with short shorts as well. They played in the gym located in Severance Hall. During this time was when the class teams started to transform into social club teams as more of a social event rather than serious competition. 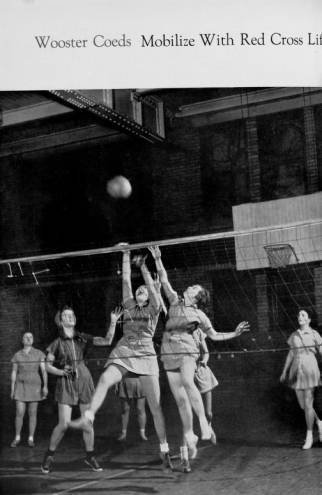 During the 1941 season is when the honorary varsity team plays a game against one other school. Also during this year was when “sports day” was held which showcase the sports of basketball, field hockey, fencing, and volleyball. The women were allowed to play in skirts and shorts with bloomers underneath because it was considered more of a feminine look to play volleyball in. Since the beginning, it has been considered a pastime sport with less physical exertion than other popular sport of that time. This is why volleyball was more acceptable for women to play during the 1930s and 1940s, but just like most other sports women played there were rules created to make it easier for them to play. Seven women were on the court at one time instead of the traditional six players, some leagues added even more players up to nine at a time. In 1944-1945 women were playing volleyball and basketball in Severance gymnasium. At that time the gymnasium was known as the cage.The manager this particular year was was Dot Aten, who replaced Alice Rodgers midway through the year. Volleyball at this time was made to be fun, teach good sportsmanship, and show cooperation among the women playing. and the Wooster women lived up to each and every one of those expectations. 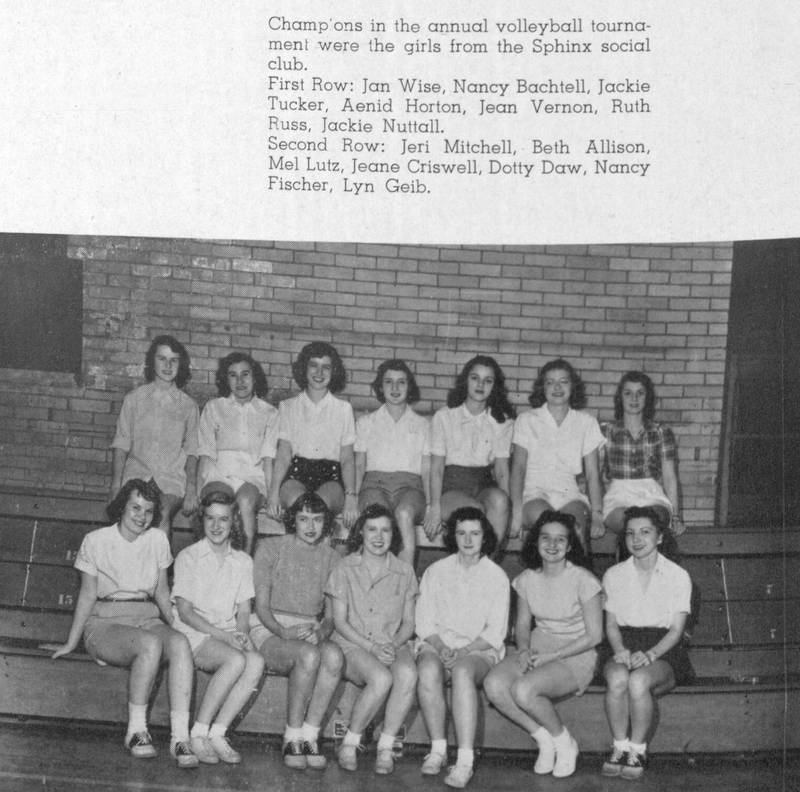 During the 1948-49 school year volleybal was still an intramural sport that took place in Severance Gym.The Sphinx Volleyball Tournament Championship was held every year for the women of the college by the Sphinx social club. A team consisted of a total of 14 girls and certainly was another achievement in Wooster women’s sports. 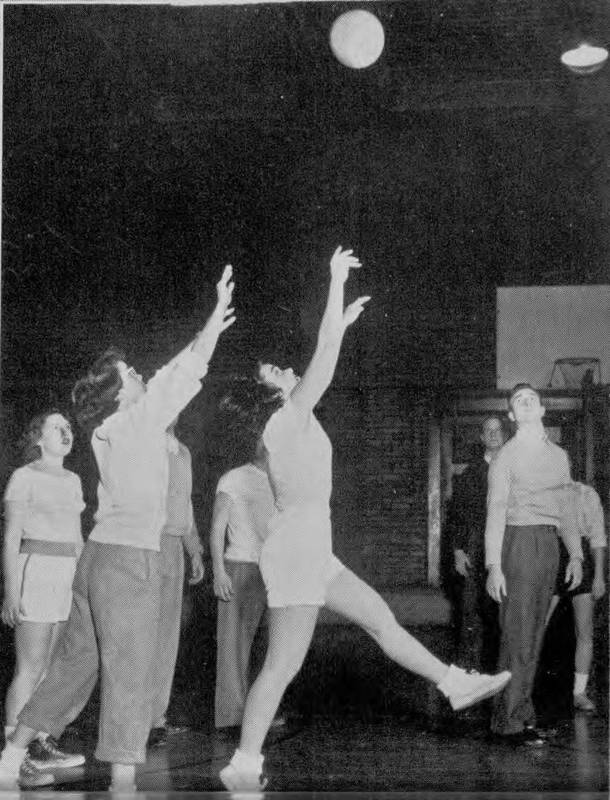 In the 1950s the idea of women playing for recreational was growing. Here is a game against a group of male students against women students. The men were often looked as the stars of the game. This was also a time where there were many opportunities for co-recreational opportunities. The co-recreational sport in 1950’s gave women the opportunity to be challenged and exposed to other sports. 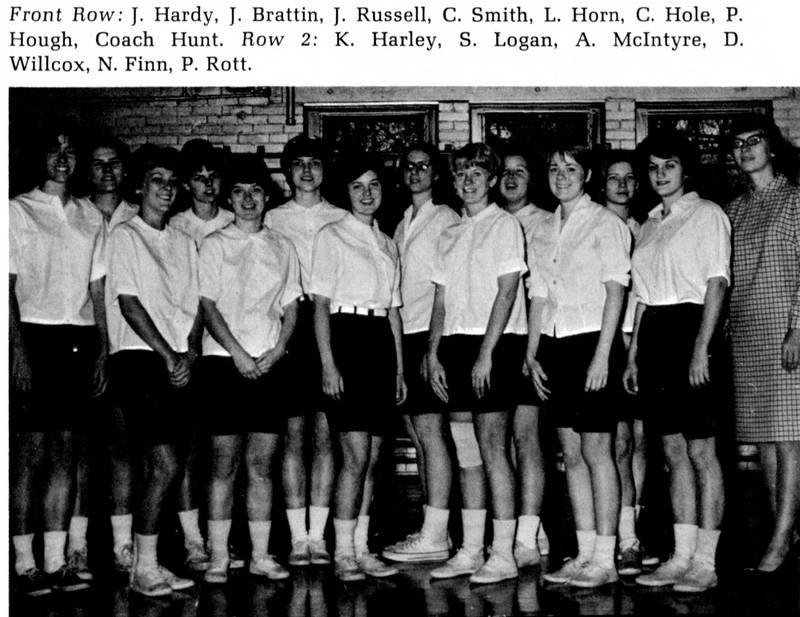 The women had their first varsity season, in the 1966-1967 academic year, finishing with a 4-2 record. The team was lead by captain elect Carolyn Hole and coached by Ginny Hunt  who was the first women’s volleyball coach and women’s athletic director at the College of Wooster. Ginny also started the field hockey program in 1965 and she would go on to double coach both sports during the same season for many years. The women’s volleyball team played Mount Union and Capital University where they gained two of their four victories during the season. This season was when the volleyball team became the 3rd women’s team to go varsity at the college. 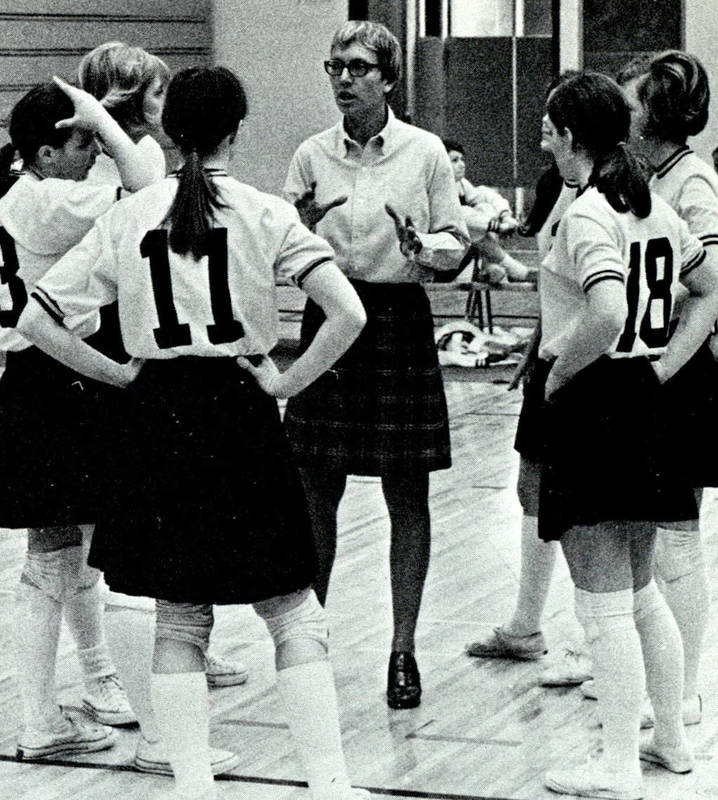 The College of Wooster hosted the AIAW National Volleyball Tournament as the Host Team during the 1973 season. At this time the host team of this tournament automatically had a spot into the national tournament. From this team three people would eventually be elected in the Wooster Association Hall of Fame: Alpha Alexander, Annie Baird, and Coach Ginny Hunt. Alpha Alexander was a four sport athlete playing volleyball, tennis, basketball, and lacrosse during her four years at the college. Annie Baird was a four year starter during her time at the college in volleyball, basketball, and lacrosse.

From 1980-2000 is known as the Age of NCAA and Conference Play. The women’s volleyball team captured victory in the regional tournament and received an automatic bid to the state finals where they would place third. The team ended the season with a 29-7 record during the 1981-1982 school year. Early in the 1980's the Wooster Fighting Scots women volleyball team was very successful. This included a winning record during 1980-1984 seasons. During 1984 they had an extremely successful year, one of the best in the programs history. The 1984 the women’s volleyball team had a record of 41-7, what an incredible season for the scots. 1984 was the first season the Women's volleyball team was in the NCAC conference and they finished conference play with a record of 6-0 and where first place in the conference. Although after this championship the program's success began to go downhill drastically.  After the 1984 championship the team finished with a losing record for the next 15 seasons from 1985-2000. In 1991 the team went 3-30 and in conference play they finished 0-8. This was followed by a 1-36 season.