For many women’s sports, the sport was segregated from men and modified for women. Softball is unique because for some time women played professional baseball with the boys, (despite softball being in existence) until it developed into a professional sport. Baseball’s establishment can be dated all the way back to 1846, and softball is dated back to 1887, but it did not become popular until the 1930s. Soon after it gained popularity, softball started being played at the college level, which led to baseball being banned for women in college in the 1930s. At the college level, women were allowed to play baseball in 1989 but this did not last long. 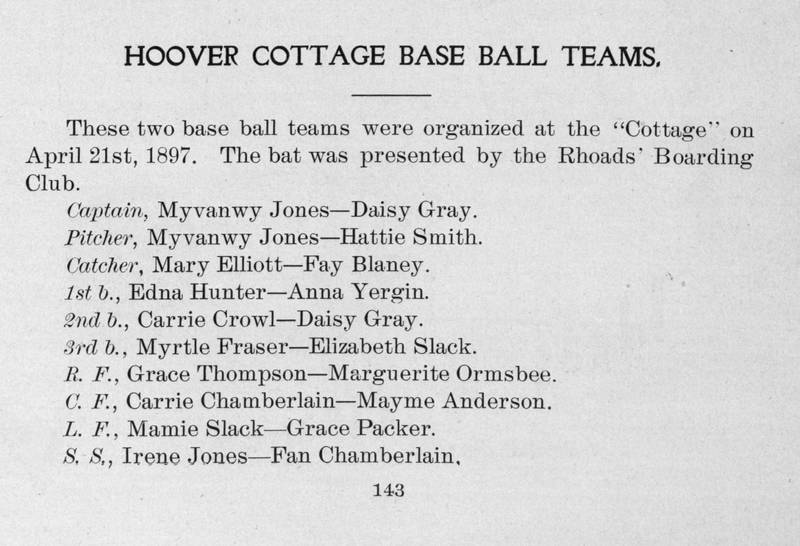 Prior to softball existing at the College, some women played Baseball as a club or recreational activity, as was common for college women during the time. In 1896, the first women’s dormitory was built, named Hoover Cottage. The 1897 yearbook mentions the girls of Hoover Cottage playing one another, in organized teams made on April 21st. 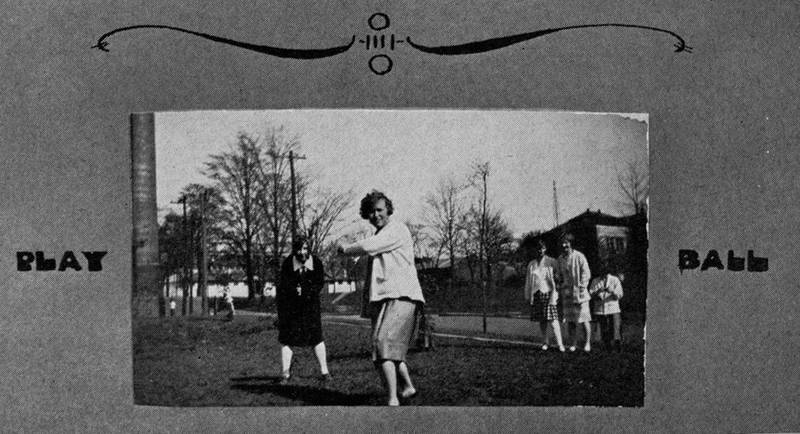 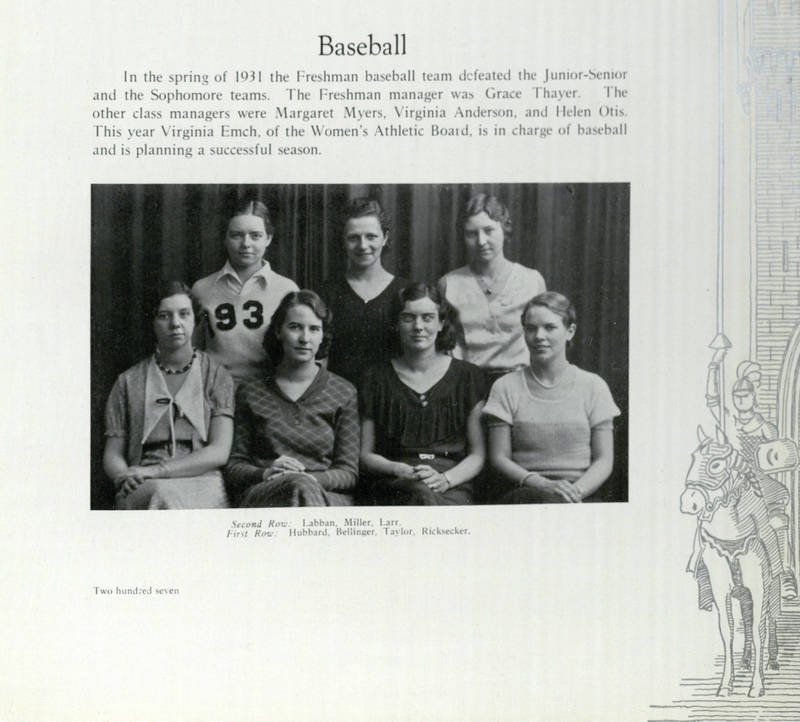 A well known Wooster female athlete, Alta Weiss, was a Wooster Prep senior in 1910, and a famous semipro baseball player. She started gaining fame even before she entered college, being a pitcher on boys’ teams as a teenager. She is remembered for discovering that playing baseball in a long skirt is no easy task, and eventually made a point by playing in wide bloomers that looked like a skirt.

Between 1897 and the 1920s, not much is mentioned regarding women playing baseball and softball at the college, although they most likely did play, it would have been as a leisure activity and possibly not at a competitive level. In 1926, inter-class competitions in baseball for women began taking place (or at least it is first mentioned in 1926). 1931 was the first year that a women’s baseball team was acknowledged in the College of Wooster Index. The coach, Ms. Dillan was also first pictured in this issue.

The 1940s were a very progressive year for softball in the United States and at the College. Softball was considered one of the fastest growing sports for the country and the school. In May of 1941, a freshman group of girls started an “after-dinner” game on Tuesdays, with Emily Scheurerman as the overseer of the sport. The games took place behind Babcock and was written about in The Voice to encourage more girls to being attending. The interest spread in September of 1942 with a random pickup game of girls, some of who had played before and some trying the sport for the first time. This pickup intramural game began being playing every Monday night, while there was no structured intramural softball league (for women) established yet.  October 1944, a weekend co-ed softball field day took place for 70 freshman students. The day was written about in the voice the following week, as a recreational day where cider and donuts were enjoyed at the end of the afternoon. In this time, more “dormitory” games were played as Saturday activities. April of 1947, girls of Holden Hall challenged floor by floor competitions that The Voice described as “undoubtedly going down in history”. For women at the college, they continued playing baseball until 1948, when club softball was first mentioned in 1948 in the Index. They brought in a women’s softball manager in 1954. 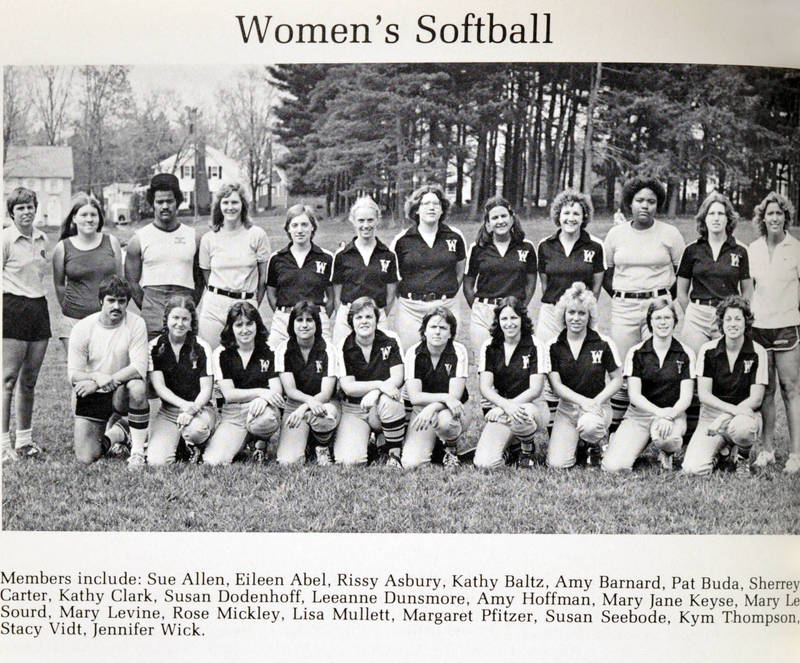 In 1961, Wooster began playing other schools in softball tournaments as was reported in the Voice as a “playday”. In 1974, students began trying to form an inter-collegiate softball league, and steps were taken to take the current intramural league to a varsity team. May of 1974 is marked as the birth of the intramural softball program for women at the college. Softball was updated from a club to a varsity sport in the spring of 1979, due to Title IX, but was removed as a varsity sport in 1987 with the loss of the Women’s Athletic Director in 1986. There is no known reason why the sport was dropped, but it was gone for over 10 years until being reinstated in 2000. This may have been due to the NCAC sponsoring softball as a 22nd championship sport in the conference. During the 13 years without varsity softball, intramurals still took place. 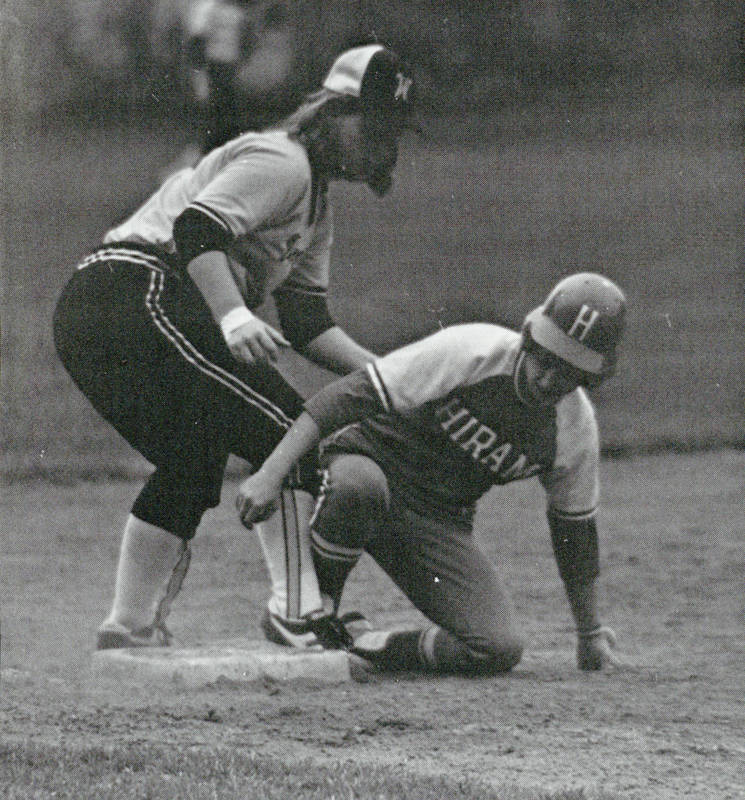 After being reinstated in 2000, the Scots softball team has had a varsity team ever since. In 2000, Lori Schimmel re-established Wooster’s softball program and built the Scots’ team into a top tier performer in the NCAC. In the 16 seasons with Wooster (2000-2015), her and her teams won 246 games and finished in the top three of the NCAC four times. In 2001, the Scots went 20-19 overall and advanced to the championship game for the NCAC tournament. The 2005 season named Schimmel Co-Coach of the year in the NCAC and gained Woosters’ third berth in the NCAC tournament. Schimmel’s 2012 team reached a school-high of 25 wins in the season. When Lori left the program in 2015, Jeff Bricker took over as Interim Head Coach. The first year without the rebuilder of the program, the Scots went 17-21. This season (2017), the Scots are helmed by Victoria Rumph and assisted by Christine Camp.